This first post I thought better to break into two because it was getting kind of long. Now that you know a little bit about why I’m doing this… lets meet Denali! Because titans are so big and rare they are usually named and I chose Denali because it translates to “the big/great one” and reminds us of our time in Alaska. 🙂

Denali arrived this afternoon and I have been busy re-potting her and figuring out where to put her! She arrived in OK condition, she has one main leaf and then a second minor leaf as well. I should pause here and explain a little bit about the plant parts before we all get confused. Underneath the soil is the corm or what you might generally think of as a  tuber. But it’s not a tuber! It’s a corm, or in reality it’s the stock of the plant. Think of a tree trunk only instead of straight and above ground its in a bundle hiding below ground. (it’s shy) The corm shoots up what’s referred to as a leaf. This leaf in reality looks like one green stalk with several leaves branching out at the top but really this is just one full leaf. Generally titans shoot up one leaf and that leaf grows from a few months to a few years gathering energy and feeding the corm which is growing bigger and bigger under the soil. Then when it’s time the leaf dies and falls off leaving the corm which then goes dormant. It is during this time when I will move it into a bigger pot and inspect the corm for any health problems. After a few months of dormancy a new leaf shoots up and the process starts all over again. This goes on for years until the corm has enough energy and is big enough to support a bloom. When that happens instead of a leaf shooting up a bloom will shoot up and the much awaited unfurling will happen! (hopefully… if all goes well) One leaf can grow as tall as 20 ft. and one bloom can be as tall as 10 ft! So we will need lots of room, light, humidity, warm temperatures, and patience! Since we live in an apartment this will be a completely indoor growing experiment!

Below is the chain of events to get ready and transplant her. You can see she has some damage from the cold and from being mailed. At this point I’m hoping for the best. She has as strong main leaf, a solid second leaf and her roots were poking out of the mailing pot so I think she is a good, solid specimen. Only some time and rest will tell if she is able to recover from her ordeal.

First I got the soil ready. Titans have a really big problem with rotting, fungus, and nematodes so it’s recommended to have completely sterilized  and well draining soil. I’m mixing my own soil using 1 part peat moss and 1 part perlite. To sterilize it I heated it in the oven at 200 F for 30 minutes. 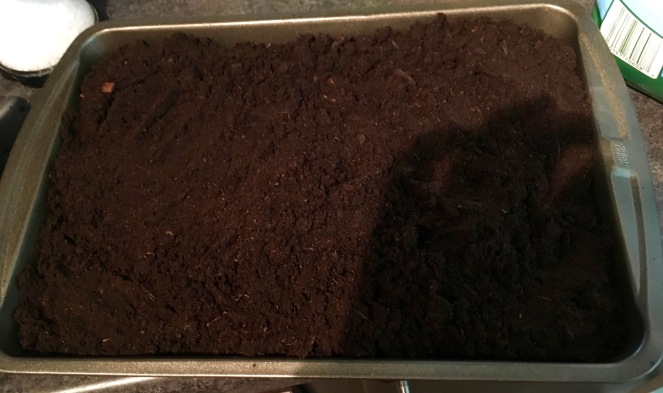 I lined the bottom of the pot with bark to help with drainage. This is a 10″ terracotta pot. Denali was mailed in a 6″ size pot and it was recommended to size it up another 2-4″.

Here she is!!! Again, 6″ pot for reference on the bottom. Here you can see the main leaf with the characteristic white spots on the leaf stalk. There is also a secondary leaf that is shorter than the main leaf. You can tell she has definitely had some wear and tear from mailing and from the cold temperatures. Titans like 75 F and the current temps lately have been getting down to the 30’s at night. 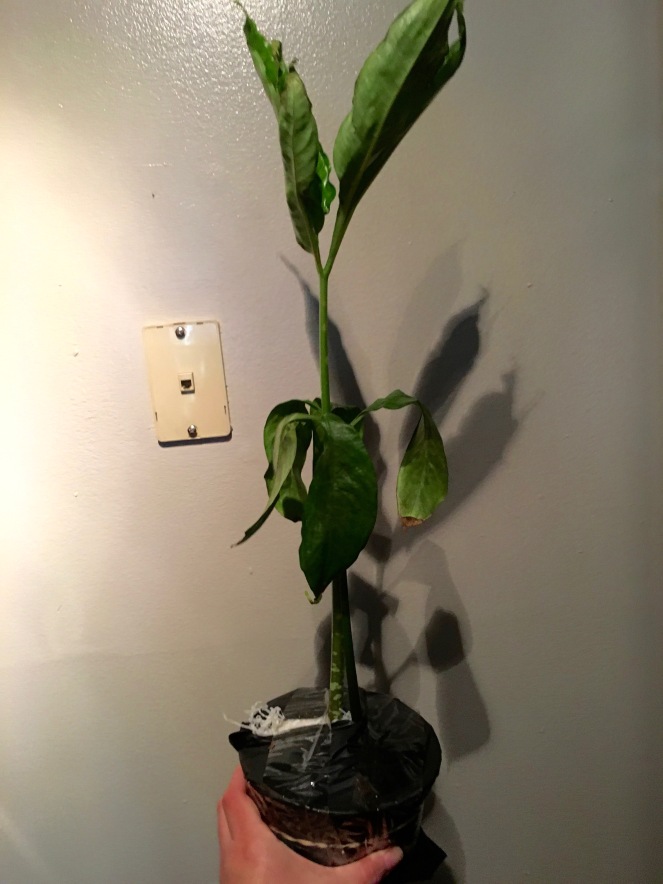 Close up of the secondary leaf, I believe the wilting and the brown tips is from the cold.

This is a close up of the top of the main leaf. You can see these leaves are standing up right, I think (without knowing exactly how old she is) that the main leaf is still unfurling. These “leaves” should be horizontal, not standing up straight. Again there is some cold damage and stress visible. 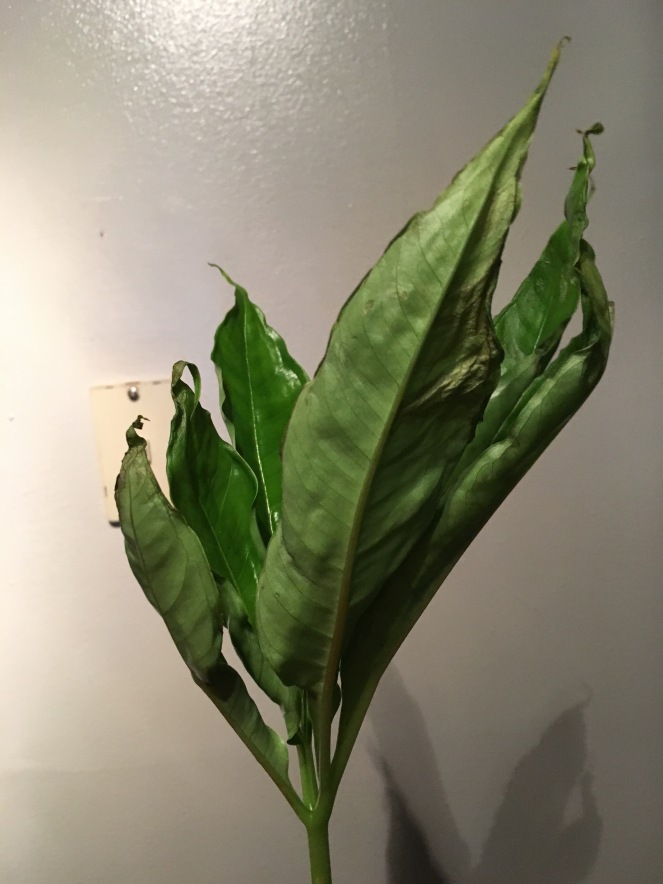 Pot ready for transplant. This is my perlite/peat mix with some osmocote fertilizer mixed in. The corm will send out lots of roots and grow very quickly so they are heavy feeders. Once she was planted I also watered with a mix that included stress reduction minerals. 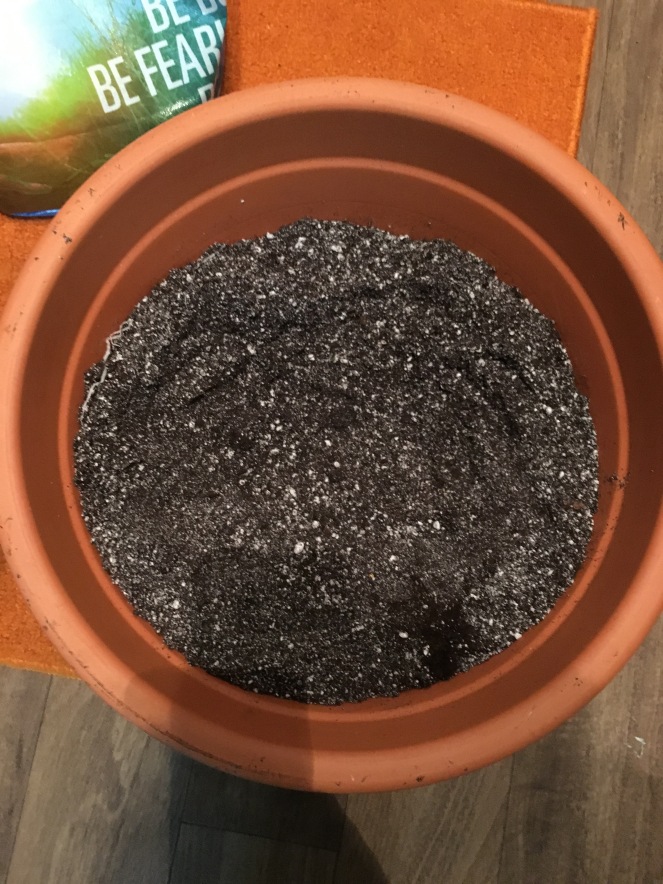 Transplanting! Looked like it was just in time too, there were roots poking out the side of the 6″ mailing pot so she was definitely ready for a bigger pot. (General recommendation is to pot in a size that is twice as large as the corm itself)

Final product. Here you can see the two leafs.

For now she is going in the mobile greenhouse we have. We are actually moving in a week so this is a temporary home for her. Why get her when we are moving? Because the colder it gets the harder it will be to ship titans in one piece so I figured we’d best get her while we could. For reference this greenhouse is 62″ from base to it’s tallest point. Denali is already 15″ tall from the soil to the top of the cluster of her main leaf. She is on a heating pad to try and maintain a warm enough climate for her. Around her and on the shelves are containers of water to try and raise the humidity and the light is a full spectrum bulb.

View from the top.