Good evening! This past weekend I finally harvested the product of a vermicompost that I started a few months ago and was able to get 3.5 lbs. worth of worm casings! This was very exciting for us since this is one experiment I was a little unsure about, especially doing it all indoors. I am happy to report that this is one experiment we will definitely keep going.

What is Vermicomposting? Essentially it is the act of using worms and microorganisms to turn kitchen scraps into a very nutrient dense soil. A type of composting, vermicomposting is capable of being done in a small area and, as we’ve just discovered, all indoors! I had heard a lot about worm bins and composting and wanted to try it because I felt bad we had kitchen and plant scraps going to waste and were unable to have our own outdoor compost bin. A worm bin was really easy to make and even easier to upkeep, the steps are below. 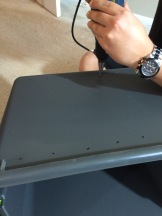 Now I will admit since this was a homemade compost bin I was a little unsure about how to actually harvest the worm casings from the bin. There are quite a few pre-made bins you can buy out there that have harvest methods built in, but for the homemade types you must do it by hand. There were several ways that I read about online, but what I finally ended up doing was dumping the whole bin out on to a tarp. I then used a slotted bowl from a salad spinner (really the only thing I had handy, use whatever works for you) to sift through and separate the worms and bedding from the actual soil. I put the bedding and worms back in the bin with some fresh matter and that was it. It was easier than I had imagined it to be! I started the bin in August and harvested in March, so 8 months, with 1000 worms, produced 3.5 lbs. of soil. Not too shabby for something I started in August and then forgot about. The soil was then spread on my plants and citrus trees, which I expect are going to enjoy it very much. Try it yourself!

More information on Vermicomposting can be found here or here, and in the book Worms Eat My Garbage. 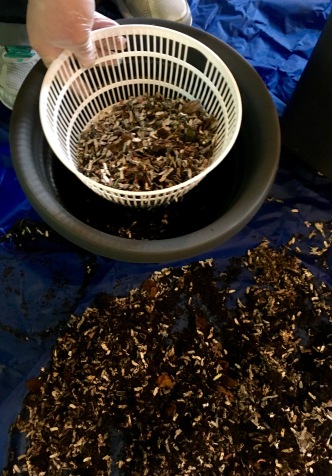 One thought on “Vermicomposting Indoors!”